The Lower Merion Ice Hockey Club was established in 1970 by a group of students led by former LMIHC President Matt Peskin. With the assistance of some parents and a few teachers and residents, the team entered the Inter-County Scholastic Hockey League (ICSHL). At that time, the league was comprised of only 14 teams. The Western Division included Penncrest, Haverford, West Chester, Upper Merion, Lower Merion, St. James and Bonner. The Eastern Division featured Swarthmore, Conestoga, Malvern, O’Hara, Marple Newtown, St. Joseph’s and Radnor. Today, the ICSHL has grown considerably to include many teams throughout the region.

The team's first uniforms were donated by the legendary and iconic NHL hall of famer, Ed Snider, the late founder of the Philadelphia Flyers. Two of Mr. Snider's sons, Craig and Jay Snider, played on that first team.

As of the start of the 2010 season, the boys LM/HH combined Varsity-JV program has separated, and formed two distinct Varsity high school teams, which now compete against one another in the Tri-County Varsity league of the ICSHL.

The 2017 - 18 season saw both the Elementary (Coach Kadir Erkman) and Middle School Bulldogs (Coach Brian Hoppy) capture Cups in their respective leagues. For more detailed information regarding a certain team, please view the team specific link from the top of this page.

See you at the rink! 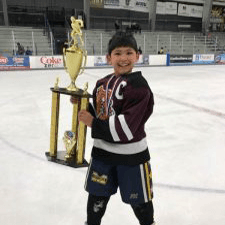